How recruitment companies can survive the recession

How recruitment companies can survive the recession

We all hate bad news but some of us are prepared to understand what it means and act early; others less so. In fact, the word “denial” springs to mind.

By the way this is not a positive vs. negative argument. This is a practical post for recruitment owners to survive the coming recession.

I’ve emerged from three recessions and my recruitment businesses emerged pretty much unscathed – take it from me it’s about facing reality and doing something about it!

The data is showing we’re heading into a recession and it’s going to be bad by all accounts.

Winter’s coming so buy a coat and stock your larder early on because the early-birds win.

In this blog I’m going to analyse the data and suggest three courses of action you should take right now to get through it in relatively good shape.

So, what does the data say?

Even before the Coronavirus crisis the signs weren’t good. The usual indicators that economists use were pointing towards a recession: copper prices slipping; credit card defaults on the rise; the value of the dollar increasing and stock market volatility. We ran a webinar in 2019 on how to prepare for a recession because even we could see it coming.

But there’s more. This is the purchasing managers index which has historically been a very accurate measurement of recessions.1 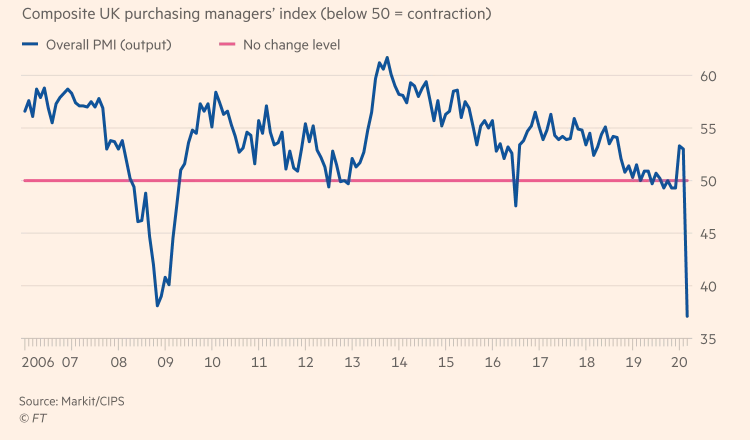 The straight line down has been caused by lock-down. Basically, everything just stopped and the country ground almost to a halt.

Analysts at Deutche Bank warn that, in a worst case scenario, the UK economy could shrink by 5.5% this year. That would be the worst performance since 19202.

This is pretty much unprecedented – we’re in uncharted territory my friends. So, what does this mean for recruitment?

The health of the recruitment industry usually mirrors employment rates. Let’s look at the data from the last recession. Peak employment levels were reached in October 2009, then came the crash.

Employment levels plummeted to their lowest level in January 2010 and then began to recover.

But it took another 3 years to reach the levels of employment we saw at its 2009 peak.

Let’s face it, it’s safe to say that the recruitment industry is in for a rocky ride.

What can we do then?

On the upside plenty of recruitment companies survived the last recession and so can you but you must act decisively and act now. Here are three suggestions you might like to consider.

1. Plan for the worst and hope for the best.

You already have a budget should business levels return to pre-crisis levels so I suggest you create two new budgets for the coming year and then map out what your business would look like in each case. Go with 50% of the business you were doing in February of this year and then a second one at 10%.

Don’t forget this is just scenario-planning, sort of war games. But it means you’re on the front foot so if this does happen you won’t panic, you’ll know exactly what you need to do.

Each scenario means new staff levels; office space requirements (working from home is now an option of course) and other costs that you take for granted. You should also double whatever provision you put in your budget for bad debt. Some of your clients may go under I’m afraid.

Also, avoid the snake-oil solutions peddled by the recruitment software market. It doesn’t matter how slick the product is if there are no requirements they won’t work.

2. Cash is king – the ones with the most cash win.

This is about two things. Firstly money,  you have a choice: money spent now cannot be spent again in the months to come when you really need it. Cut whatever you can right now, not to the bone so it hurts your business, but anything you class as discretionary needs to be closely examined.

All staff employment and most of your nice-to-have marketing spend should go. Some marketing spend needs to stay but a lot of it makes no difference at all. You might also consider outsoucing some services you previously did inhouse. It can be cheaper and it’s definitely more flexible.

Staff need to go too. OK, they’re on furlough now but face facts, many of them aren’t coming back to work with you so prepare your list and include any redundancy costs in your budgets.

You may also consider reducing salaries and commission schemes for those who do return. This is a case-by-case exercise but don’t rule it out – those costs have to come down.

The offices are next. Whatever you can do to reduce your office cost exposure is well worth doing because you are not going to need all that space for some time.

I realise there are a lot of loan options out there too but tread very carefully, especially if personal guarantees are involved. You must pay the loans back at some point and if this recession lasts for years that may be a real struggle.

One last thing – be all over your aged-debtor list. As soon as an invoice is overdue get on the phone and remember, it’s the squeaky hinge that gets the grease. Keep at it until the invoice is paid. And don’t forget to increase that bad debt provision!

3. Question what you sell and who you sell it to

In a recession some types of recruitment do better than others and some sectors hold out better than others. Let’s start with the sectors. This is from a study conducted by the Huffington Post in 2010 and then updated in 2017 3. It does relate to American jobs but western economies all behaved similarly 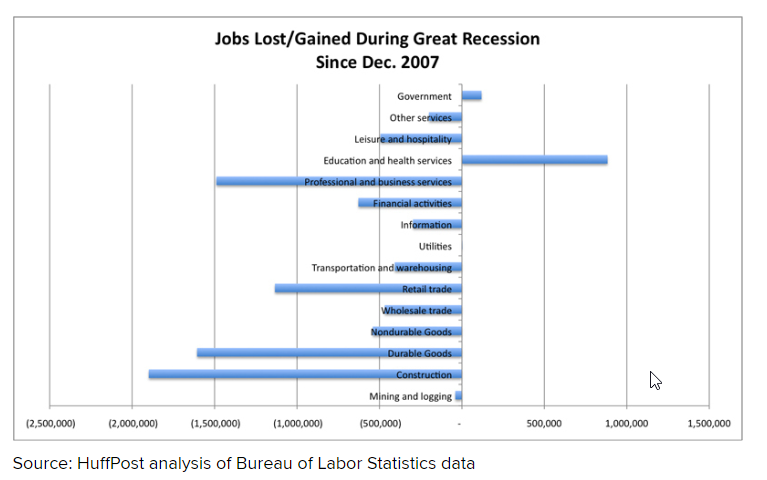 Anyhoozle, as you can see some sectors suffer more than others so if you supply in those sectors you may like to consider spreading your bets and looking at other sectors who fare a little better. I know it’s tough but it’s better than the alternative.

The kind of recruitment you offer matters too.

For a start contract and temp tends to fare better than perm. Some companies just have blanket head-count freezes so managers can’t hire even if they have a need and a budget. In this case the only option for them is to take a contractor.

Even if there isn’t a headcount freeze, employers are often hesitant to hire a permanent member of staff if they aren’t certain about the future – again they turn to the contract suppliers. This is how my companies survived the last three recessions.

Having said that contract recruitment is very different to perm and it also requires a strong cash-flow. I’d investigate both points before you commit.

You might also consider radically reviewing your service offering to make it more of a product and capture market share by being better than the competition. According to the REC  in 2019 recruitment in this country was worth about £40b 4. Even if that halves that’s still a lot of money. If you can reimagine what you sell you can take a bigger share of a smaller market and still survive.

I’ll be blogging and doing a webinar on this very subject very soon so keep an eye out for it.

Now, what about the niche vs. volume contest?

Well, it’s a slam-dunk for niche provided you’re in the right niches of course. It’s worth putting the effort in to find a skill that has enough requirements to make a living but not too many that everybody is looking at it.

Finally, here’s another thing that’s happened in each of the recessions I’ve worked through. Clients have less requirements and there are more candidates on the market so filling the jobs you get will be easier. As a result, clients will often reduce the number of agencies they deal with and guess what – they keep the better ones.

This is not just about performance now; in the market yet to come the office junior will be able to find suitable candidates (not quite but you know what I mean). Cost is a big factor of course but it’s also to do with your client care and the way you make your clients feel.

In a study conducted by the Bain group they found that 67% of clients swapped suppliers “because they weren’t being treated properly”. Client care will take on a whole new importance in the New World.

I think I can summarise the situation up in three bullet points: –

Remember what I said: in winter the survivors have the warmest coats (clients and requirements) and best stocked larders (cash)!

Look on the bright side though. If an old lag like me can come through three recessions pretty much unscathed, so can you, if you act now.

I’m available if you’d like to discuss anything in this blog post – free of charge of course.

About the Author: Mike Ames

Toggle Sliding Bar Area
This site uses cookies to function and to monitor visitors usage, you can find out more in our Privacy Policy. By using the site we presume you're okay with this, if you would prefer not to there are details on controlling your cookies in our privacy policy. Find out more Ok

We embed a number of tools into our site from third parties such as video and sound files. Many of these tools track your interaction, usually anonymously. If you wish to prevent these cookies you can find details about how to do so via our Privacy Page

We also use some non-essential cookies to collect information for making reports and to help us improve the site, you can read much more detail in our Privacy Policy Most web browsers allow some control of most cookies through the browser settings. To find out more about cookies, including how to see what cookies have been set, visit www.aboutcookies.org. or www.allaboutcookies.org.